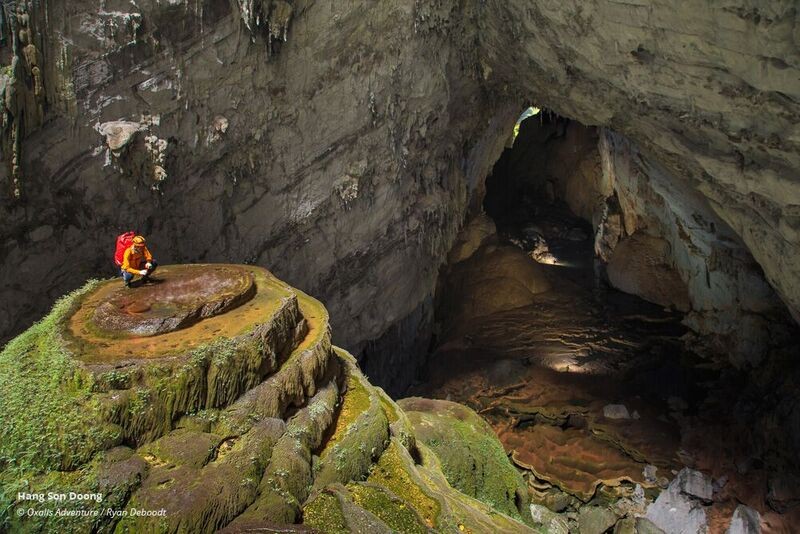 The gateway to Son Doong is a steep slippery slope into darkness, the first challenge for those who wish to conquer natural challenges. 5 full days of being a “cave” man and exploring the underground world require explorer strong legs, and a courageous heart!

More than 9 kilometers in length, average height of 200 meters and width 150 meters, Son Doong Cave is large enough to hold a block of New York City, including 40-storey buildings. Son Doong passes Deer Cave in Malaysia to become the largest natural cave in the world, with the estimated volume of 38.5 million cubic meters.

Scientists estimate that it took 2 – 5 million years for Son Doong Cave to reach its record-breaking size.

With flashlights that are capable of lighting up to 10 meters, explorers can observe the 50-meter-height cave with pristine stalactite, formed millions of years ago. The beauty is simply breathtaking.

A major river flows forcefully through the Son Doong Cave, forming the main artery of the cave. Anyone who wants to conquer Son Doong has to cross this river twice.

Overcoming deep water and fast-flowing stream is compulsory. This is a “catalyst” to make the journey even more attractive. This 6-day-5-night trip is for those who are not afraid to conquer any challenges!

The next location is a stalactite with a unique name “Hand of the Dog”, taller than 70 meters. The route to this area is large enough for the giant Boeing 747 to fly through. At the top of the “Hand of the Dog”, you can capture the whole gigantic scale of this cave.

From darkness to light

The next step in the journey is to the first sinkhole – Doline 1. Why do these sinkholes exist? Why are they the unique characteristic of Son Doong Cave?

Many years ago, the river cut through the dome of the cave, causing the ceiling to collapse, forming a large hole, allowing  sunlight to enter the cave. With lights, vegetation started to grow inside the cave. This is a unique feature of Son Doong Cave, differ itself from  other caves in the world.

At Doline 1, there is a lush green hill, entitled “Watch Out for Dinosaur”. This is where the life on the ground connects through wind and rain with the underground vegetation.

Being photographed while standing on top of “Watch Out for Dinosaur” is probably the dream of anyone with the heart for adventure.

The road from Doline 1 to Doline 2 is only a few hundred meters long, with absolutely no sunlight, a secret passage covered with fog. The space inside the cave with this massive size is enough to fit the Statue of Liberty and more than enough for an air show.

Jungle inside the cave

The vibrant welcome of Doline 2 is a lush green fern carpet. This jungle is called “Garden of Eden” by the British explorers.

With its own precipitation system, Son Doong has its unique climate. The trees can reach up to 30 meters, housing many insects and birds.

At the end of the cave lies a small lake, stimulating the curiosity of the explorers with the origin of the water flow through this area known as Passchendaele. Does it come from an even bigger cave? Both those who have reached Son Doong and those who have only observed the magnificent beauty through images, everybody is certainly intrigued and excited by this questions

The last know point of Son Doong is a giant stalactite cliff, with the height of 70 – 80 meters. It is considered one of the highest stalactite columns in the world, appropriately named the “Great Wall of Vietnam”.

If the length of the Great Wall of China has challenged those that love challenges, the scale of the “Great Wall of Vietnam” undoubtedly does not disappoint also

It takes three consecutive days to reach the last point of Son Doong Cave. The last three days contain the journey back to the starting point. You can amplify the challenge to a whole new level by taking memorable photos at the landmarks inside Son Doong.

With the title "World's biggest cave" voted by National Geographic, Son Doong expedition becomes one of the most sought-after tours. Even with the high cost of $3,000/person, the tours are sold out to the end of 2016. Avoiding rainy and storm season and allowing time for the cave to rest, the tour is operated in limited time (from February to August every year). The wait list of inspired explorers continues to grow, challenges the patience of those who want to reach Son Doong. With this once in a lifetime opportunity, the trip to the world’s biggest cave is free and surpassing those in the never-ending waitlist.

Click here to find the chance to explore Son Doong.

Watching others succeed through your lens, depressed or jealous?