Ho Chi Minh City, 9th March 2021 - Red Bull, the leading energy drinking brand in the world, has partnered with the Hoang Anh Gia Lai (HAGL) Football Club to launch the talent recruitment tournament, giving young football talents and enthusiasts an opportunity to be a part of the professional training program. The partnership also highlighted Red Bull’s efforts in spreading positive power and unleashing the inner strength of many young talents along the paths to conquer their passions. 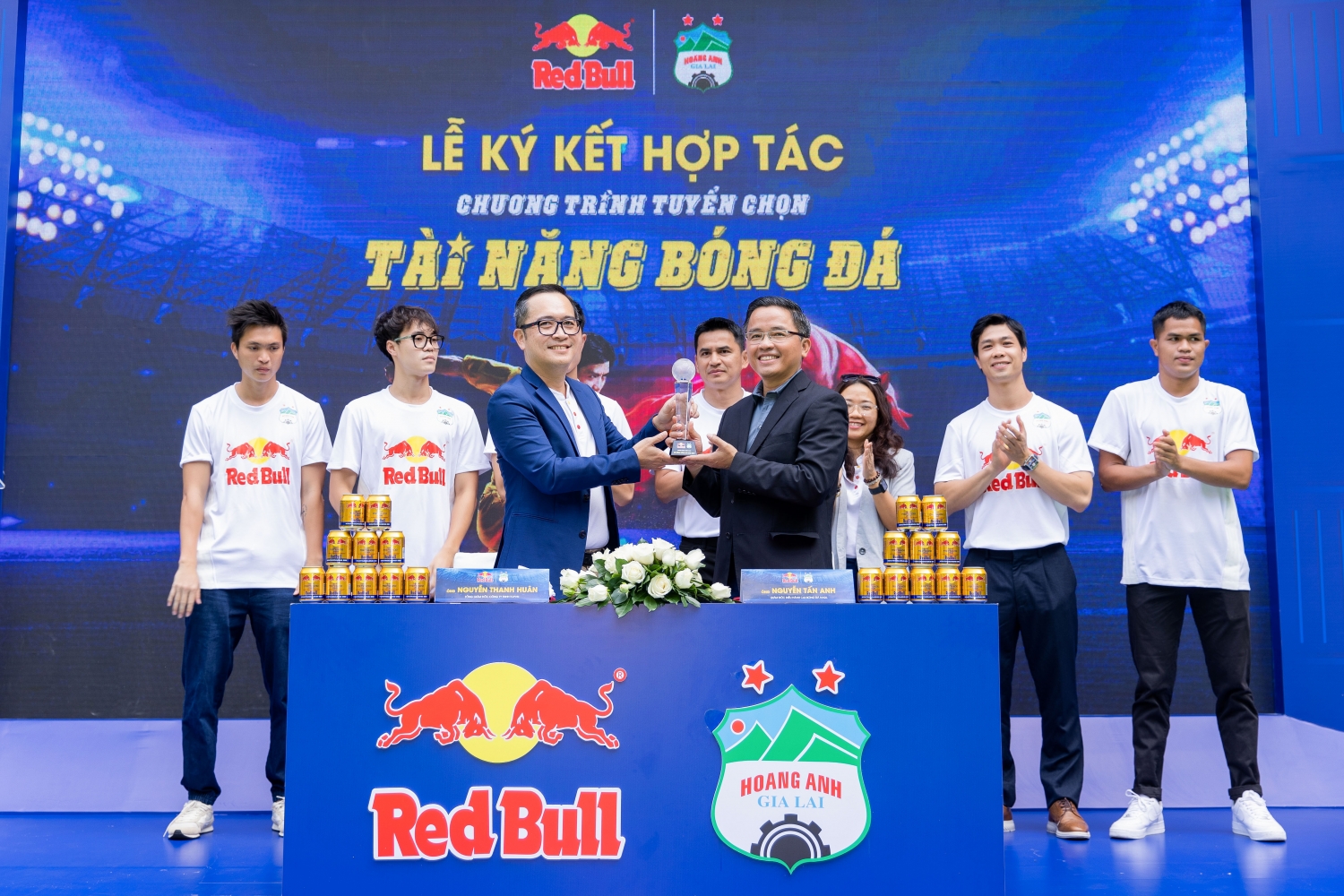 For many, the passion for the “King of sports” has been fueled by various achievements of the national football team. Starting with the marvelous victory at U23 Asia, the team did not stop but continued to amaze the public with successive accomplishments, from being the champion of AFF Cup 2018 to winning the gold medal at SEA Games 30, and many more victories at the continent-wide level. The class of football players, namely Cong Phuong, Van Toan, and Xuan Truong, etc, with outstanding skills and equivalent capability, has lightened up the spark for sports in many football fans. The success of this generation is largely attributed to sports academies, large-scale training initiatives, and professional recruitment programs. Among which, HAGL stood out as one of the first professional football institutes in Vietnam, contributing many “golden” names to the Vietnamese football scene.

With the aim of making professional coaching programs more accessible to young talents, Red Bull partnered with HAGL Football Club to launch the football talent recruitment tournament helping to evoke the inner power of these potential professional football players for teenagers from 15 to 20.

Within the partnership, the recruitment tournament shall reach out to 05 provinces and cities, including Tien Giang, Can Tho, An Giang, Pleiku and Binh Thuan, kicking off from April 2021.

At the elimination round, candidates will be divided into teams to compete 3-on-3 and 5-on-5 with each match lasting 3 minutes. After which, 4 best candidates per province will be shortlisted to the final assessment round in Ho Chi Minh City in June 2021.

In this final round, 20 selected candidates from 05 provinces will be grouped into teams of 5 members to play offense. In the end, at least 1 and at most 4 candidates with the best performances will be selected by HAGL Football Club. The winners have the chance to participate in a 4-month training program compatible with their age range, hosted by Hoang Anh Gia Lai Football Club’s Youth Team in Gia Lai province. All living and training expenses are covered by HAGL Football Club, in alignment with the Club’s standard. During the 4-month training course, the young talents will receive football scholarships valued at 20 million VND per individual from Red Bull, and the chance to appear in the brand’s video along with the popular football player Quang Nho. After the training period, these young talents are presented with an opportunity to sign the official contract with HAGL Football Club.

Mr. Nguyen Thanh Huan, Country Director of TCPVN - the owner of Red Bull brand, stated: “For young people, the path to pursue their dreams will always be filled with obstacles. Red Bull hopes to empower them with a source of positive energy in order to evoke the inner strength within each young talent and cultivate their resilience, both physically and mentally. We believe that the young talent recruitment tournament, with the company of Hoang Anh Gia Lai Football Club, will bring forth their confidence and courage to overcome any challenges they might encounter along their path to pursue professional football.”

Mr. Nguyen Tan Anh, Managing Director of HAGL Football Club, stated: “The potential, capability, and perseverance of young Vietnamese football players, especially those within the age range of 15-20, are tremendous, and that treasure has yet to be found. Many talented football players are waiting for a chance to be nurtured and shine. Through this recruitment tournament, we hope to discover the most potential faces and let them be a part of our club’s talent pool.”

With this journey of evoking the inner strength within Vietnamese future talents, once again, Red Bull reaffirms its mission of spreading positive power, as part of TCPVN’s sustainable development in Vietnam.

Founded in 1981, Red Bull quickly became a famous and successful energy drink brand in Thailand. In 1987, Red Bull entered the international playground, opening a whole new market for energy drinks. From the first Red Bull cans sold to date, Red Bull prides itself on being the source of energy and inspiration for the community in more than 167 countries and being the world's leading energy drink brand.

Constantly affirming its reputation, helping to boost energy for body and spirit, Red Bull officially came to the Vietnam market in 1994. More than 20 years of "supplying energy" for Vietnamese users with international quality, Red Bull constantly inspires young Vietnamese to explore their potential, overcome all challenges to achieve their goals, with the spirit of "the bravery of conquering the goal".

Founded in 2001 as a handover from the Department of Sports, Gia Lai province, the team immediately won the championship in the professional Vietnamese football league in 2003-2004 and the Super cup 2003-2004. In 2007, the HAGL – Arsenal – JMG Academy was established and contributed players to the national U-19 team that gained success in the Southeast Asian league and the Asian U-19 elimination round in 2024. They marked the nice and kind football styles of HAGL.

Hoang Anh Gia Lai Football Club currently owns the Pleiku Stadium, the only and one stadium in Vietnam designed in an international style with roof and separate seats serving capacity of 12,000 people. The team now is stationed in Ham Rong Sports Center which is 12km far away from the Pleiku City. The center includes 5 standardized football fields, gym, physiotherapy room, swimming pool, cafeteria, airy space and convenient location.